In an unfolding and unprecedented environment, the Green Building Council of Australia turned to innovation, ingenuity and a little bit of magic to “transform” TRANSFORM 2020.

Opening the online conference, CEO Davina Rooney emphasised how the existential challenges of 2020, whether bushfires or coronavirus, “are forcing us to reprioritise and refocus,” Davina said. So, what might that refocus look like?

John Brogden AM, chief executive officer of Landcom, kick-started the conversation with a timely reminder. In such challenging times, “you don't have to be an expert to check on people's mental health”. John, a passionate champion of Lifeline, urged the industry to take care of each other. “This will end. People need to see leaders look beyond this particular crisis and into the future,” he said. As the virus abates, every organisation will “want to be the first out of the blocks to get the economy back on its feet and people back into work”.

The value of placemaking

Placemaker Andrew Hoyne also painted an optimistic picture. He talked about the potential for placemaking to turn “a waste of space into an active place” – whether that’s transforming dark corners or industrial facilities into a new breed of “traderhoods”. His enthusiasm was electric and his focus on future possibilities inspiring. The work of our industry “doesn’t happen overnight” he said. Now is the time to think creatively and to “captivate people in a conversation” that can change the way we build places in the future. “Use this time to create a new vision.”

The Western Sydney Aerotropolis, backed by an ambitious City Deal, promises to supercharge the region with 200,000 new jobs and opportunities. But how challenging is it to create a sustainable plan over a 30-year horizon? Tim Poole, Chief Operating Officer of the Western City & Aerotropolis Authority, unpacked the opportunities and obstacles ahead. Tim’s mission is clear – to create a local jobs hub that is also liveable and sustainable. “Start with liveability not infrastructure. It’s what happens first, not after we get the roads in place, that matters,” he said. 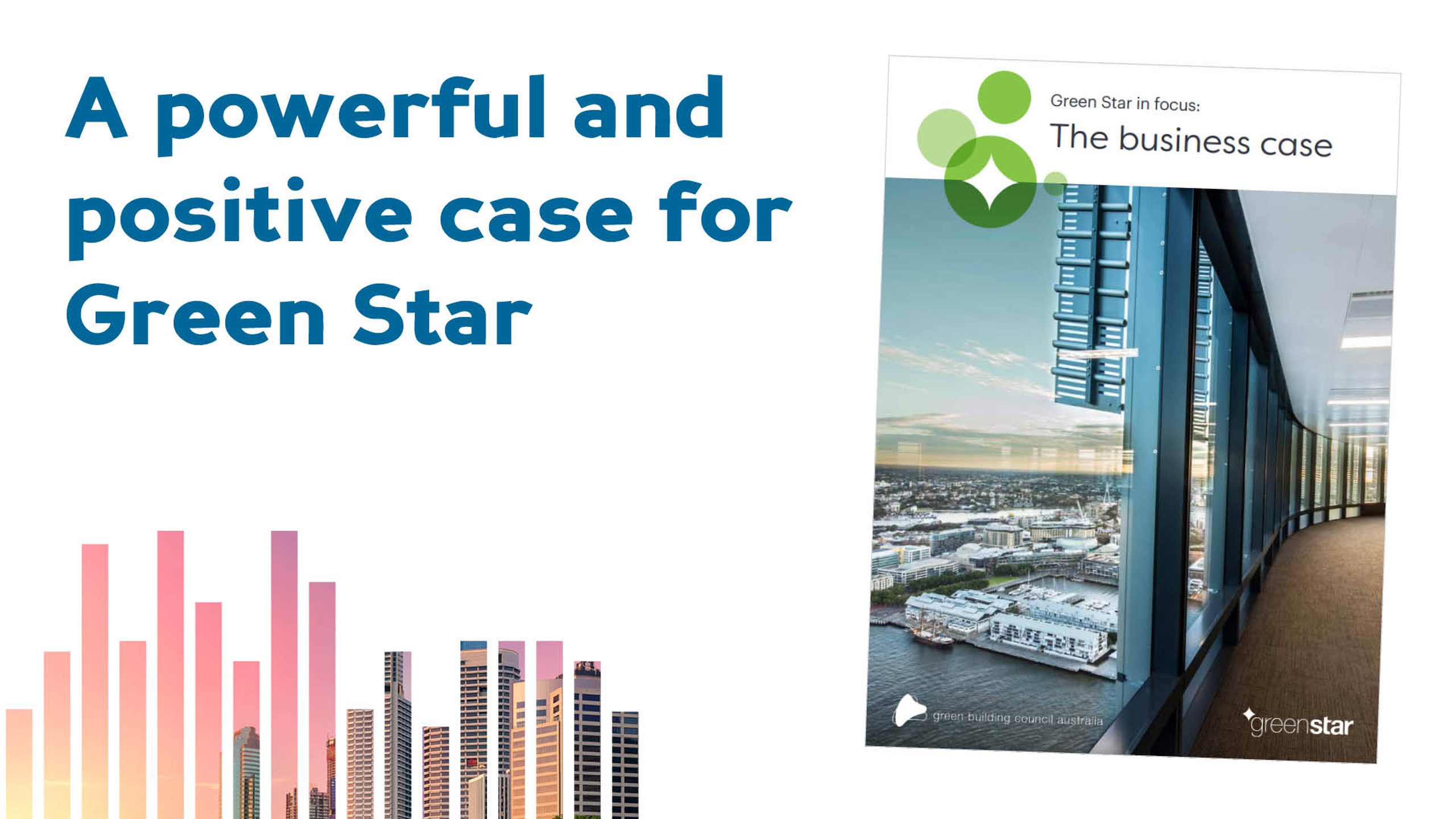 The business case for Green Star

Launching a long-awaited business case, the GBCA’s CEO Davina Rooney urged the TRANSFORM audience to “talk about the money” as it takes sustainability to scale. While the bushfire crisis underscores the cost of inaction on climate change, Davina also said “people still need a number today that they can put in their spreadsheet”. And these numbers are impressive: a 4.3% green premium in value, 13% higher returns, a 25% WALE, 56% lower vacancy rate and more. Download Green Star in focus: The business case.

In conversation: Climate change – future risks, challenges and the role of the TFCD

We can expect many interesting discussions in the months ahead about how we rebuild our economy and decarbonise at the same time, said ARENA’s chair, Martijn Wilder, in a cracking conversation with Davina Rooney. Martijn emphasised that Covid-19 was a “short term hit”. “But the climate impact on assets won’t go away.” Companies looking to the longer-term horizon understand this, he said. Ultimately, managing climate risk will be treated like occupational health and safety – in other words “absolutely critical to running a business”.

Leaders panel: Our industry as an agent of change

A powerhouse panel of Davina Rooney, CBRE’s managing director Amanda Steele and Landcom director Pamela Hanrahan had our online audience energetically fist pumping and virtual high-fiving. Pamela urged sustainability professionals not to take their foot off the pedal. She pointed to swathes of academic research that suggests Covid-19 won’t be an excuse for organisations to shelve their sustainability strategies. In fact, organisations “sharpen their focus” on sustainability in times of stress. In the aftermath of the GFC, for example, companies that recognised sustainability was core to their long-term success were more likely to seize a competitive advantage, Pamela said. Amanda Steele agreed that we won’t lose focus on sustainability. “During the GFC, I was never offered so many jobs in my life,” she said. “People will become more focused on the back of COVID-19.” We can strengthen our “solidarity muscle” now in preparation for the next wave of climate action ahead, Amanda added. 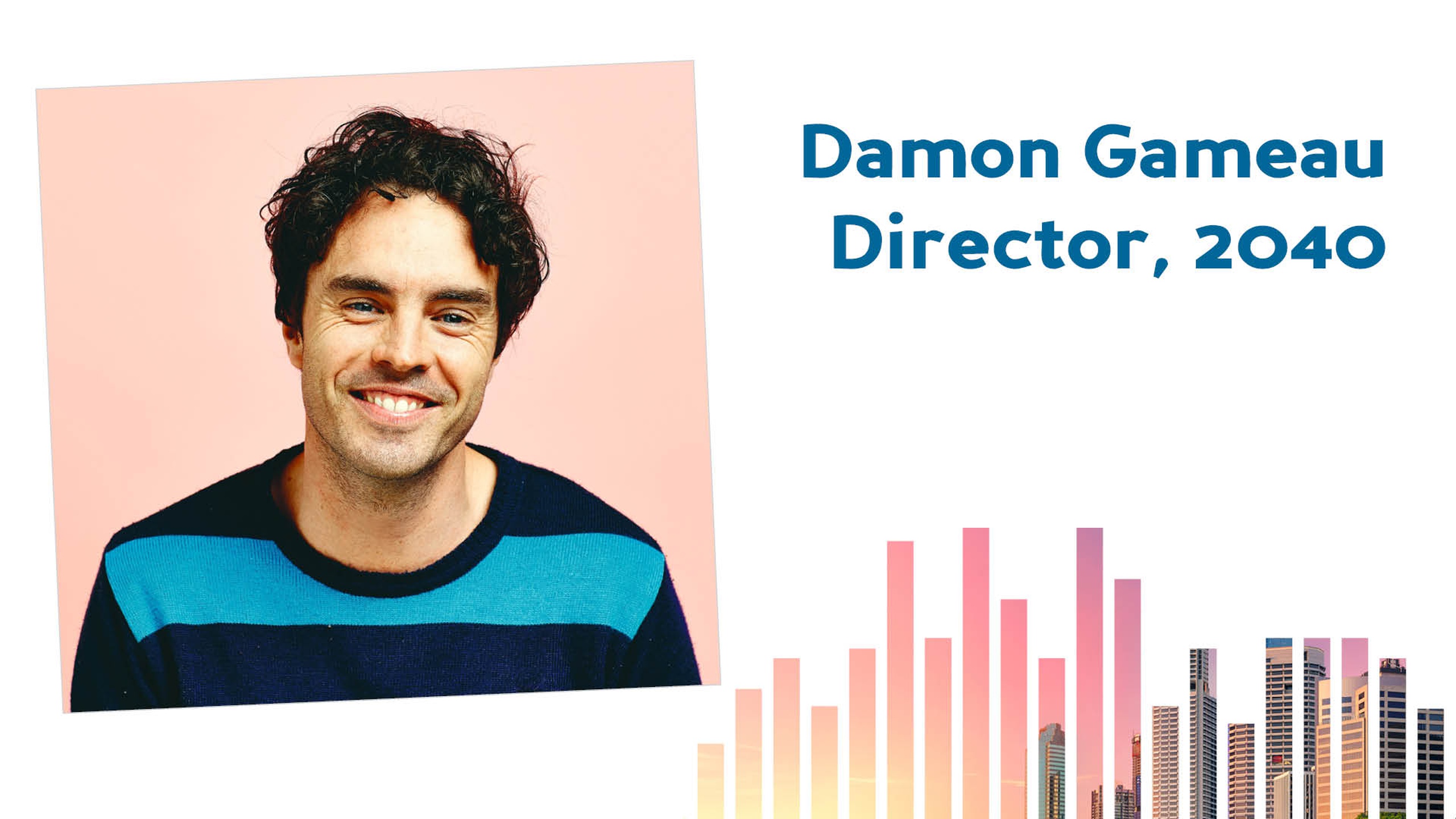 In conversation: Understanding the language of an emergency

Speaking of muscles, Damon Gameau, director of documentary 2040, is a champion of “muscular optimism” that is grounded in facts but also gives people hope. Damon, an Australian television and film actor, directed 2040 as a “letter” to his four-year-old daughter that asks us to imagine “what would life look like in 2040 if we embraced the best that already exists”. He urges our industry to start “serious conversations” about what a “new system” might look like. “Let’s excite people and rebuild something very special out of this and transform the way we interact with each other and all living systems,” he said.

Our panel sessions explored some of the big picture, long-term projects that won’t go away – from electrification and decentralised energy to embodied carbon.
We heard about The GPT Group’s “pragmatic” approach to electrification from Steve Ford as his team works towards net zero. Mirvac’s David Palin explained why his company’s decision to make carbon neutrality “is no longer a distant future but a definite future”. Later, Dr Barbara Nebel, CEO of Thinkstep Australasia, outlined the “two levers” of material selection and energy efficiency that can tackle embodied carbon, while inspiring case studies on MetroTunnel and Barangaroo South underscored the possibilities when people set targets.

The questions and comments from the audience flowed freely throughout the day, buoying spirits and bringing people together. “I’m feeling the strength of our community resilience,” said one participant. “While the current difficulties make it hard to focus on the long term, the conference is reminding me what we are working towards,” said another.

Wrapping up the first day, the GBCA’s Head of Public Affairs and Membership, Jonathan Cartledge, unpicked the day’s common thread.
“The current Covid-19 virus, while extremely challenging, will also give us a chance to reset, rethink and rebuild.” Get ready for more rethinking and rebuilding tomorrow for Day 2.